Stormin 7’s is an Ainsworth Gaming Technology powered online slot with five reels, three rows and one hundred pay lines. There is a casino game theme portrayed in the symbols that include images like dollar signs, piles of cash, diamonds, playing cards, dice and poker chips. As usual the high value playing card icons are present on the reels as lower paying symbols.

Stormin 7’s has wilds, a re-spin feature with multipliers and a free spins round that is played on a different reel setup. Up to one hundred pay lines may be selected with betting options starting at 0.01. 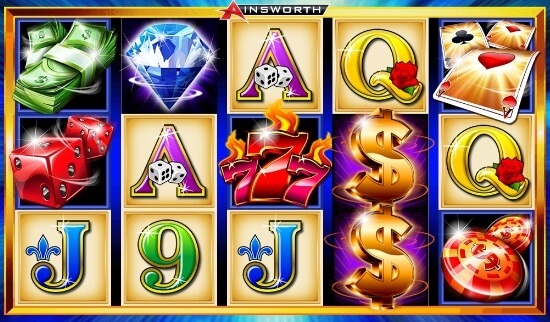 The large diamond symbols act as the Stormin 7’s online slot scatters. These are the only symbols that pay all ways and do not need to line up left to right. Three, four or five of them pay out scatter wins and trigger the free spins feature.

Ten free spins are given for three or more diamond scatter symbols. These are played immediately with the triggering bet but they are played on a different set of reels with a different pay table.

While the feature is in play all golden dollar sign wild symbols become scatters and five of them will award another five free spins. As a wild the dollar sign will also substitute all other symbols, apart from the Stormin 7’s symbol which is a new addition for this feature.

This logo symbol becomes an extra wild during the feature and appears on reels two, three and four. It will then substitute all symbols apart from the golden dollar sign. If the logo appears on two or three reels at the same time the re-spin feature is activated.

The reels containing the logo symbols are re-spun while the others remain in place. The re-spin feature offers two additional wild symbols, the Stormin x2 and the Stormin x3. These appear on the second and fourth reels respectively and both substitute all symbols except for the golden dollar sign. If involved in a win these symbols multiply wins by 2x or 3x depending on which of the two is involved. If however both are involved in a win then the win is multiplied by 6x.

The Stormin 7’s symbol only appears on the middle three rows and will substitute all symbols apart from the dollar sign, the x2 and x3 symbols. There is no possibility of triggering more free spins or re-spins during this feature.